Bengaluru Smart City Limited aims to provide core infrastructure, clean and sustainable environment through the application of smart solutions, the living conditions of those who are building these smart cities are in stark contrast.

At the end of his day’s shift, Samiran Das* makes his way from his worksite near Bowring Hospital in Bengaluru’s Shivajinagar area to his room just off Queen’s Road. It is located in a labyrinthe of windowless tin-roofed shanties, where over 100 people like him live. They are all construction workers involved in the projects under the Bengaluru Smart City project, toiling to improve the civic amenities in the centre of Bengaluru.

If you live in Bengaluru, you’ve likely seen these settlements on the sides of roads where Smart City work is ongoing. The densely packed blue tin sheds are built on debris and held together loosely by scrap mud, ropes and cement. More importantly, these are built by migrants like Samiran themselves when they arrived in the city after they were recruited by a thekedar or a contractor. “We were shown this place and we were given some leftover construction materials and this is where we built a temporary shed to stay,” says Samiran pointing to the rows of sheds around him. 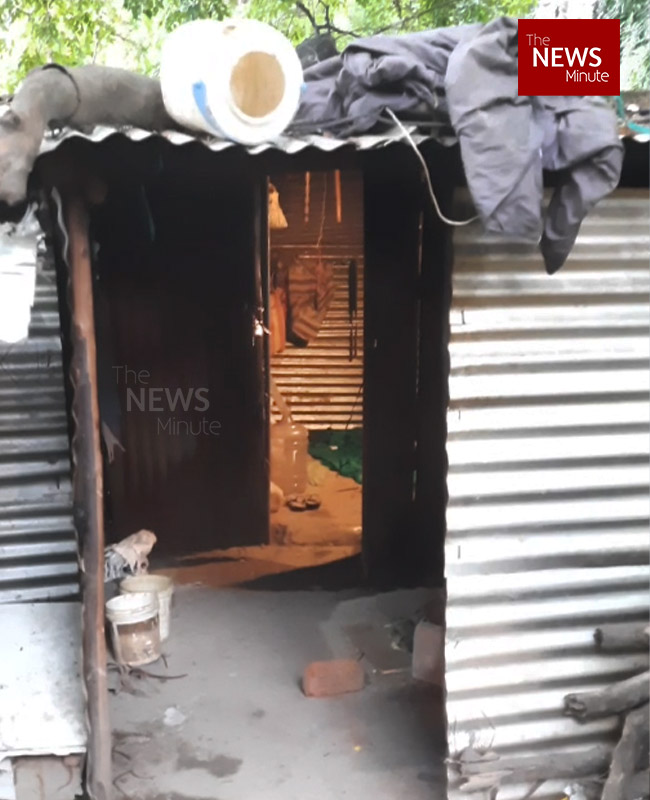 Samiran, 25, arrived in Bengaluru during Diwali last year as a distressed migrant worker looking for a job that will make him enough money to send home to his family. He has been involved in pipeline work under the Smart City Project near Bowring Hospital in the city centre. “I spend the day working at the construction site and I am paid Rs 425 for eight hours of work,” he says. He says that he can work up to 14 hours in a day to earn more money.

On good days, he comes back to his room and cooks a simple meal of rotis and potato sabji. “Usually, we cook for each other — when I am on night duty I prepare the food for the other workers,” Samiran says. But when it rains, water gushes into his tiny room, forcing them to scramble to save their personal belongings.

The rooms have no internal water system and generally have one bulb in a corner. There was no dedicated water supply at the settlement near Queen’s Road and the bathing water was dumped into an open tank that was festered with moss, leaves, and insects. During the day, the rising temperatures make the tiny tin-sheeted rooms inhospitable and in the nights, mosquitoes are a major problem for the people. There are no mattresses provided so most of them use bedsheets over tarpaulins as their bed. The floor often has shrapnel, stones, rods, and broken materials.

Smart City only for the privileged. Those who are building it in #Bengaluru have to make do with this pic.twitter.com/MTLa9rml12

Stomaching the living conditions, the workers turn up for work every day, relaying roads and building tiled footpaths in and around central Bengaluru. Some of them were involved in redeveloping popular spots like Brigade Road, but there is a stark difference between their workplace and their living conditions. “We keep moving from one site to another. When we start work at a site, we are shown a spot where we can set up the sheds. We know that we will be moving once the work is over. Many of these sheds are temporary structures. But even if it is temporary, we have to live in them,” Samiran says. 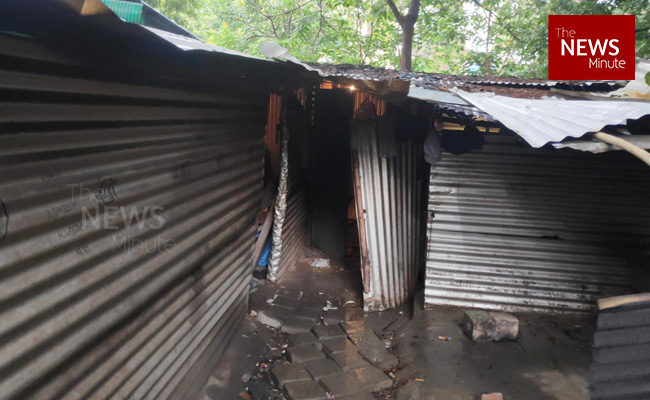 In the settlement where Samiran lives, there are four bathrooms for over 100 people. He says none of them are functional and it has been that way for the last two months. The settlement is also home to women like Madahvi, 46, who came to Bengaluru from Raichur. She says that she goes to a nearby washroom every day instead of using the one in the settlement. “I don’t use the toilets here — it is no longer functional and we have nowhere else to go,” she says. 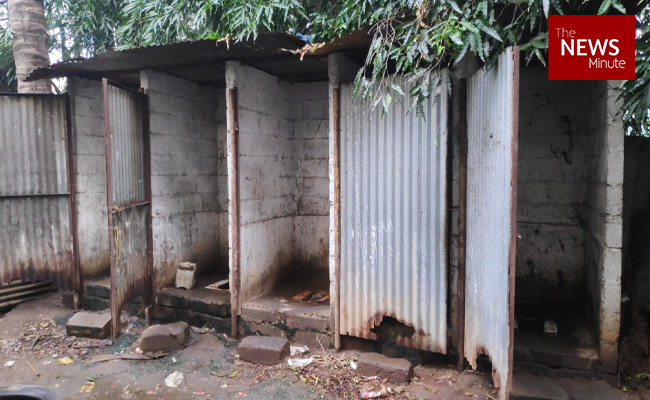 The workers housed in tin sheds near the Jawaharlal Nehru Planetarium on Raj Bhavan Road, hail either from Andhra Pradesh or the border district of Ballari. They, too, live in dilapidated shacks made of aluminum sheets. These make-shift sheds are provided with minimal water and electricity supply, and the sanitation facilities are extremely poor. Their children do not go to school and live under the same conditions — exposed to vehicular traffic, dust, and lacking proper nutrition.

The situation is identical in the two camps on Infantry road, in the same neighbourhood of the state secretariat Vidhana Soudha as well as the Bengaluru Police Commissioner’s office. Here, the workers have been living in packed tin sheds. These less-than-100-square-feet rooms house three to eight people each. They here carry out varied jobs including masonry, tiling, electrical work and tarring. They cook their meals inside these rooms and makeshift bathrooms have been provided for them outside. They complain that the sheet houses get very hot to live in the summer. And with terrible toilets and bathrooms provided, most of them are forced to bathe on the road side. 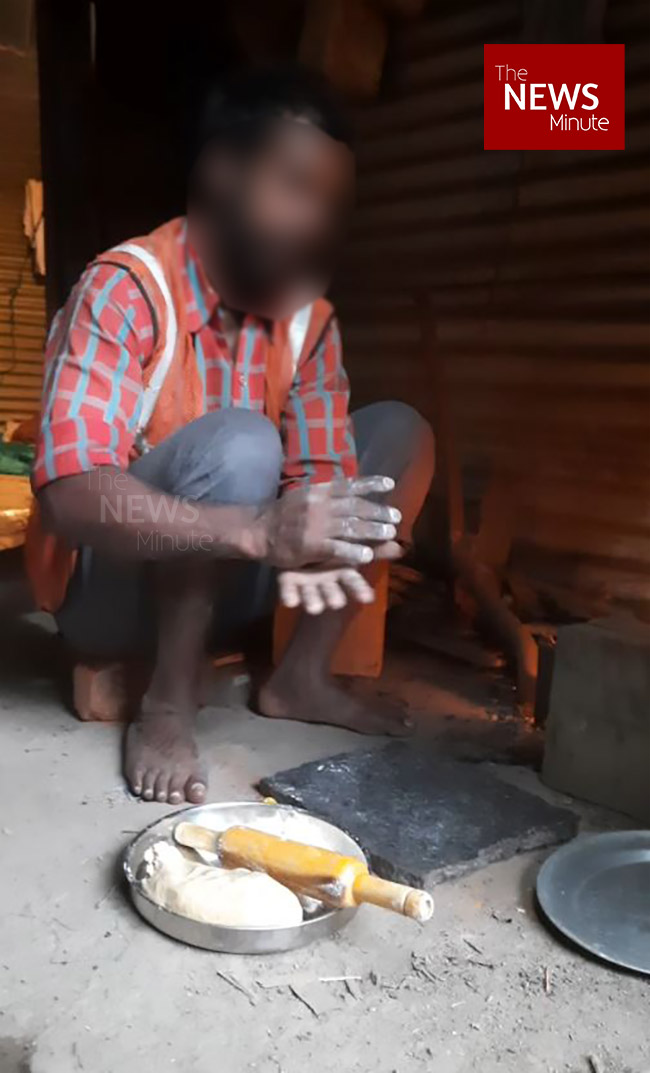 None of these camps have any space for social distancing, and the people living in these cramped conditions every day risk contracting and spreading COVID-19. None of these rooms have proper doors and no windows and hence have no ventilation. The people who live here have no protection from heat or rain. Many of their sheds leak when it rains and form pools of water inside. There are no separate toilets for men and women in these camps.

Most of the workers do not live with their families. Many of them, especially those from states like Bihar and Bengal, have left their families in their hometowns. But those hailing from different parts of Karnataka live with family, including young children.

The workers are paid through the Bengaluru Smart City Limited which is under the Urban Development Department of the Ministry of Housing and Urban Affairs. Across Bengaluru, most of the workers are migrants, brought to the city by contractors who hire them from states like West Bengal, Andhra Pradesh and Jharkhand or from other parts of Karnataka like Koppal, Raichur and Kalaburagi. While most of them have been working in Bengaluru for periods ranging from one to eight years, they only know the name of their supervisors and are unaware of the company they work for.

The All India Central Council of Trade Unions (AICCTU) filed a report in April this year highlighting the problems faced by the workers constructing the Bengaluru Smart City projects. The living conditions are similarly abysmal in other parts of Bengaluru too, the report says.

AICCTU pointed to Section 34 of the Building and Other Construction Workers (BOCW) Act which imposes a responsibility on the employer to provide free of charge accommodation, which must have a separate cooking place, bathing facilities, washing and lavatory facilities. “This provision has not been complied with by the smart city project. Rule 5(9) of the BOCW Act imposes a duty on the employer to maintain latrines, urinals, washing facilities, and canteens, in clean and hygienic conditions. Moreover, the latrine/urinal must be covered, have a proper door, and fastening. Neither of these provisions have been complied with by the smart city project. It is necessary that immediate steps are taken to ensure proper accommodation in line with the fundamental right to live with dignity,” AICCTU’s report read. 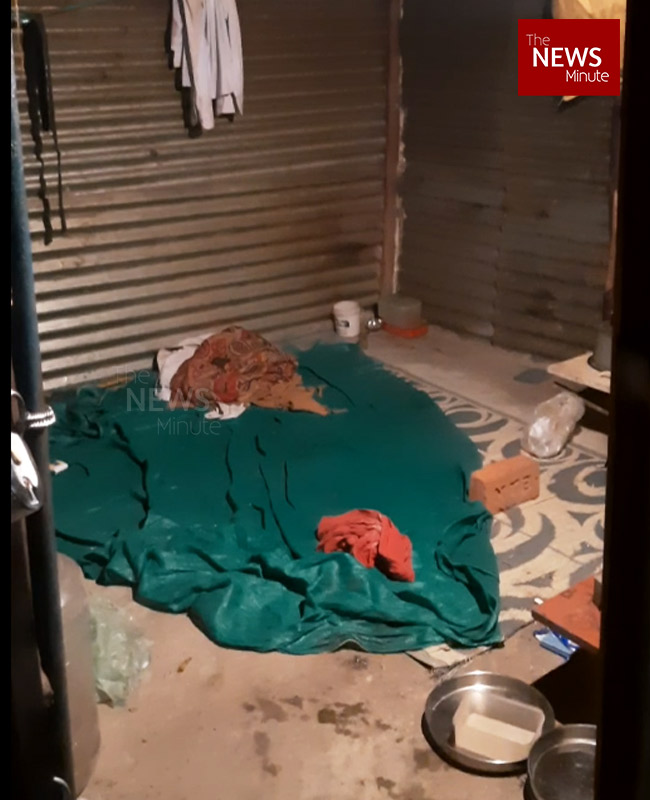 This report was submitted to officials including Rajendra Cholan, Managing Director, Bangalore Smart City Limited, and Gaurav Gupta, the Nominee Director and Chief Commissioner of the Bruhat Bengaluru Mahanagara Palike (BBMP). There has been no response from either of the officials or the concerned department on the report so far.

“We submitted two reports but have received absolutely no response. Even our follow-up report has not been acknowledged. And the living conditions remain the same till date, we have not seen any improvement,” says Maitreyi K of AICCTU who was part of the team that visited the location.

TNM spoke to Rajendra Cholan who is the Managing Director, Bangalore Smart City Limited. He said that iDeck, a government body, along with Executive Engineers are the nodal officers for employee welfare. While acknowledging that he received the first report, he said that he had visited a few camps. “We had constituted a committee of 12 contractors, our project management consultant (iDeck) and chief engineer along with the respective executive engineers, for the issue of welfare of labourers in all our projects after the report was given to us. At that time, I instructed officials to immediately follow up because it was our responsibility as a principal employer,” he told TNM.

Living conditions of those who are building #Bengaluru Smart City in stark contrast. Detailed story coming up on @thenewsminute pic.twitter.com/Y47KU13RFx

When TNM pointed out to him that the living conditions continue to remain abysmal, he asked for photographs as well as videos and said he will “look at this and rectify.” He added that if there is no improvement found, then there will be a penalty imposed on the contractors, the benefit of which will be passed on to the workers.

The shoddy treatment of workers is not limited to the Smart City project. Even those working on other such projects like the airport expansion project, Bengaluru Metro Rail, Highways projects, live in similar conditions. And these projects too employ workers who are migrants.

While the Bengaluru Smart City Limited aims to provide core infrastructure and give a decent quality of life to citizens, provide a clean and sustainable environment through the application of smart solutions, the living conditions of those who are building these smart cities are stark in contrast.