India is to construct a fleet of domestically-designed reactors, along with VVERs imported from Russia and EPRs from France, Saurav Jha reports 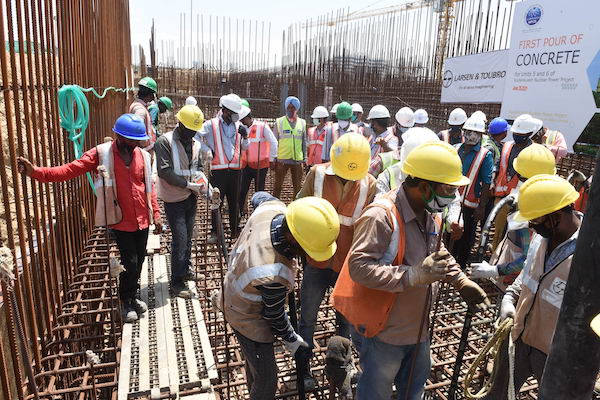 With 22 operating reactors, one recently synchronised with the grid, ten under construction and ten more accorded firm sanction, India has one of the most active civil nuclear sectors in the world. India’s Department of Atomic Energy (DAE) expects to have 22,480MWe of nuclear capacity in operation by 2031.

Its civil nuclear portfolio is also becoming more diverse, with the addition of pressurised water reactor (PWRs) alongside the construction of larger and improved Indian pressurised heavy water reactors (IPHWRs).

DAE also intends to commence construction on commercial fast breeder reactors (FBRs) in the 2020s based on the experience of the Prototype FBR (PFBR) at Kalpakkam, which DAE expects will be commissioned by October 2022.

While the domestic industrial base is being consolidated via the construction of new 700MWe IPHWR-700s, India is looking overseas for PWR technology — and that need not only mean Russia. India continues to be interested in Western PWR technology, with NPCIL receiving a binding techno-commercial bid from France’s EDF in April 2021 for the supply of engineering studies and equipment with regards to the construction of six EPR-1650s at Jaitapur in Maharashtra.

On 10 January 2021, Kakrapar Atomic Power Station Unit 3 (KAPS-3) became the first IPHWR-700 to be synchronised with the grid.

The grid synchronisation of this reactor, which attained first criticality in July 2020, marks a new phase in the IPHWR programme. KAPS-3 is, after all, the first of 16 indigenous 700MWe PHWRs, with the remaining 15 either at various stages of construction or at the pre-project stage having been accorded administrative approval and financial sanction.

Of the remaining 15, five IPHWR-700s (including KAPS-4, which is expected to attain first criticality sometime this year) are under construction and are expected to be commissioned progressively by 2027.

Site clearance has also been accorded by India’s Atomic Energy Regulatory Board (AERB) to a further four IPHWR-700s, which along with six more are going to be built in fleet mode. Pre-project activities are currently under way for these ‘fleet mode’ reactors and all ten are expected to be operational by 2031.

This fleet will not only consolidate India’s domestic supply chain for PHWRs but also mark a new generation in CANDU technology development.

While retaining many features of the baseline IPHWR-540, the Gen III IPHWR-700 design has certain key improvements. Uprating from 540MWe to 700MWe has been achieved by increasing the quantum of nuclear fissions in the uranium fuel bundles and by flux flattening in the core. Absorption of this additional heat is achieved by allowing up to 3% partial boiling at the coolant channel outlet, even though the number of coolant channels stays the same as before.

Particularly noteworthy are the enhanced safety features of the IPHWR-700, such as the interleaving of primary heat transport system feeders, to reduce the core void coefficient and minimise reactor over-power during a loss of coolant accident (LOCA). The IPHWR-700 also incorporates a passive decay heat removal system, regional over-power protection, a containment spray system, a mobile fuel transfer machine and a steel liner on the inner containment wall. The passive decay heat condenser is capable of removing up to three percent decay heat. The IPHWR-700’s emergency core cooling system (ECCS) consists of passive high-pressure injection, followed by an active long-term recirculation phase for removal of decay heat, using ‘all-headers’ injection for this purpose.

Along with new IPHWR-700s, India also continues to build Russian VVER-1000s. End-June 2021 saw the first pour of concrete on Kudankulam Nuclear Power Station (KKNPS) 5&6. Both units are being built at a cost of $6.65 billion at current exchange rates. Kudankulam 5 is scheduled to take 66 months from first pour of concrete to completion, while Kudankulam 6 is expected to take 75 months. At the moment, KKNPS 1&2 are operational, while KKNPS 3&4 have achieved about 50 percent physical progress in terms of construction. Though KKNPS 1 has achieved a decent plant load factor in recent times, KKNPS 2 seems to be operating at only around half its nameplate capacity at the moment.

India continues to be interested in importing Western PWR technology. This is evidenced by recent forward movement on the Jaitapur nuclear power project (JNPP), which received in-principle approval back in 2009.

Despite pandemic-related travel complications, the governments of India and France facilitated interactions between EDF and NPCIL which allowed EDF to submit to NPCIL a binding techno-commercial offer on 22 April 2021 to build six third-generation EPR-1650 nuclear reactors at Jaitapur. The fact that discussions took place in trying times pursuant to the delivery and receipt of the binding offer is itself being seen as a mark of seriousness in both countries.

According to EDF chairman and CEO Jean-Bernard Levy: ‘The submission of EDF’s binding techno-commercial offer for the Jaitapur project is a major step forward for the Group and the French nuclear industry. This key milestone has been achieved thanks to the trust-based relationship built over time with our Indian partner, and the excellent collaboration and continuous efforts of the EDF and NPCIL teams. This is yet another significant step towards the materialisation of this flagship project for our great nations, and the establishment of a long-term partnership in the civil nuclear field between both our leading nuclear industries.’

EDF’s binding offer follows a non-binding offer made in 2018, which was preceded by an Industrial Way Forward Agreement (IWFA) signed between NPCIL and EDF the same year. It is the IWFA that outlined the broad terms of cooperation and the binding offer derives from the script of that document. As such, the binding offer in the main consists of:

As desired by NPCIL and enshrined in the IWFA, EDF has taken responsibility for engineering and procurement. EDF also guarantees the performance of each of the six EPR units under specific conditions and for a predefined period of time, and will train NPCIL’s future operating teams.

In the assessment of this writer, the result is that the Indian-origin content of these reactors will be far less than it could have been had the arrangement been similar to what was decided for Taishan 1, where the Chinese decided to keep most EPC activities for themselves. In fact, the first two units at JNPP are likely to have an overwhelming amount of imported content. EDF has said that it will rely upon the know-how of its subsidiary Framatome to supply the engineering studies and equipment for the six nuclear steam supply systems, and will partner with its historical partner GE Steam Power for the supply of the engineering studies and equipment of the six conventional islands, all of which are to be equipped with the French ArabelleTM steam turbine.

The Indian nuclear establishment has perhaps decided that foregoing localisation is a necessary tradeoff to reduce project risk — and to ensure performance safety, given China’s recent experience with Taishan 1.

To mitigate Indian concerns about the EPR design, France’s Alternative Energies and Atomic Energy Commission (CEA) has in the past shared with DAE the assessment of the French Nuclear Safety Authority (ASN) with respect to the EPR design’s post-Fukushima safety appraisal and assured India that there will be no additional costs to ensure the EPR’s safety in the post-Fukushima regulatory environment. It would be surprising if DAE does not desire further inputs with respect to the recent incident at Taishan 1. Importantly, EDF’s binding offer specifies that ‘as the owner and future operator of the plant, during the construction phase, NPCIL may benefit from EDF and its partners’ assistance, notably regarding the sharing of other EPR project-related lessons learned’.

The Indian nuclear utility NPCIL will be responsible for the construction and commissioning of all of the six units at JNPP. It will also secure all necessary permits and consents in India. EDF and its industrial partners will assist NPCIL during the construction phase. Environmental and coastal regulation zone clearances for JNPP had already been granted by the relevant Indian Ministry in 2010, and this clearance seems to have been extended further.

The requisite land for JNPP is already in NPCIL’s possession and pre-project activities such as geo-technical investigation, boundary wall construction, construction power supply, site office for construction staff, meteorological tower, laboratory buildings and approach road etc. have been completed by the company. NPCIL’s application for site clearance for the project is currently under review by AERB.

Although NPCIL has agreed to forego high domestic content levels, it cannot compromise on the competitiveness of the project. Apparently, the objective is to keep the initial power tariff from these EPRs at or below ?6.5 ($.087) per unit, which will be competitive with other baseload sources in a decarbonising environment.

Given that the project will be financed on a 70:30 debt-equity basis, the nature of the loan package secured for the JNPP project will be crucial towards meeting this objective. EDF has declined to be an investment partner, with finance for the project set to be generated from NPCIL’s balance sheet and the Government of India. The French supplier will however facilitate discussions between NPCIL and financial institutions such as BPI France and SFIL, who support a French Government export credit scheme, for a significant portion of the required loans. A sovereign guarantee from the Government of India will be necessary to secure this loan package.

EDF probably understands that JNPP’s competitiveness will require some degree of localisation in any scenario and has therefore been working ‘in-depth’ towards identifying Indian suppliers for the JNPP project. Some 200 Indian companies have already been pre-qualified by EDF for this purpose. Moreover, EDF knows that for the JNPP project to be successful it has to enthuse India’s political leadership with respect to industrialisation and employment goals. In any case, cross pollination between EDF’s existing supply chain and various local players is a prerequisite for negotiating local environmental, labour and safety regulation issues.

For JNPP 3-6, EDF is likely to delegate some purchasing activities and studies to local companies. EDF believes that 35-40 percent localisation will be achieved for the JNPP project as a whole (i.e. all six units), which is expected to span some 15 years.

The stepwise approach to localisation is acceptable to NPCIL, which wants to prepare Indian industry for building the IPWR in the future.

The IPWR design will incorporate both Western and Russian approaches and the desire to absorb French nuclear codes and standards remains a driver behind DAE’s continued interest in JNPP. To build capacity EDF will setup an engineering platform in India, which will carry out part of the detailed engineering studies and all execution plans.

EDF’s strategy also includes the launch of a pre-feasibility study, conducted by it in association with International Institute of Nuclear Energy and Veermata Jijabai Technological Institute, to establish a centre of excellence in India to train engineers and technicians, and to support the development of the necessary set of skills for the project.

Overall, India continues to see the growth of its civil nuclear sector as an essential ingredient for meeting its industrial and decarbonisation goals.

JNPP is expected to have an installed capacity of 9.6GWe, and generate up to 75 terawatt hours per year thereby avoiding the emission of 80 million tons of CO2 per year. Almost 10GWe of emission-free baseload power would be very welcome indeed for India’s western grid, which will have to support considerable manufacturing growth in the next two decades.

France’s involvement in India’s nuclear expansion plans will also provide further legitimacy to India’s peculiar nuclear liability regime and will help New Delhi set the tone for its negotiations with other potential Western partners for other light water reactor sites that have in-principle approval. Indeed, France could well emerge as a ‘new Russia’ for India. At the moment, all eyes are set on the signing of a binding framework agreement for JNPP, something that EDF expects to have in the bag sooner rather than later.